Where we ask ourselves: did we talk about the same rejection methods lately?

Are the two really related, though?

First, let’s convince ourselves that the rejection method discussed in Rejection method works equally well for discrete probability densities. As we saw, there are two random draws for each sample:

For discrete densities, instead of using a uniform distribution for the first draw, it suffices to use the equivalent discrete distribution to draw one of the possible discrete alternatives. After that, the procedure on the $y$ axis remains unchanged. 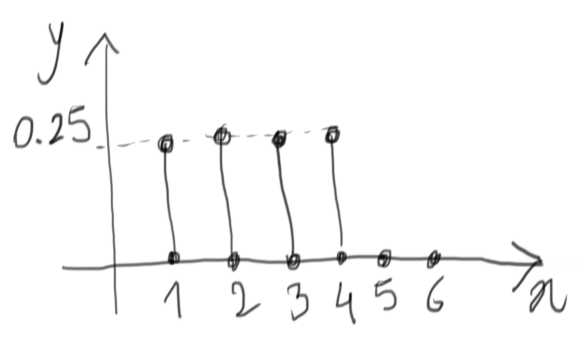 The enclosing function would in this case be one with value $0.25$ over all six values (in brown below), which corresponds, with proper scaling, to the discrete uniform drawing of our D6: