How can we simulate a die with 4 faces with a die that has 6?

Some games require rolling a 4-sided die to get some random outcome in a specific phase. This is usually accomplished using… a 4-sided die (also known as D4), usually a regular tetrahedron (which has, indeed, 4 faces).

What can we do if we only have a more commong 6-sided die instead, i.e. a cube or D6 in playing jargon? Let’s take a look. 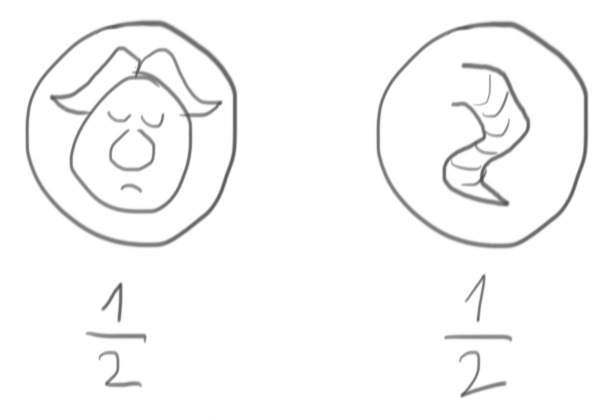 We have a (hopefully fair!) die at our disposal, i.e. a device that is capable of generating each of its faces with probability $\frac{1}{6}$:

We’re definitely onto something, because at this point we can do the following association:

and we are sure that our virtual coin is fair (as long as the D6 is fair, or course!). 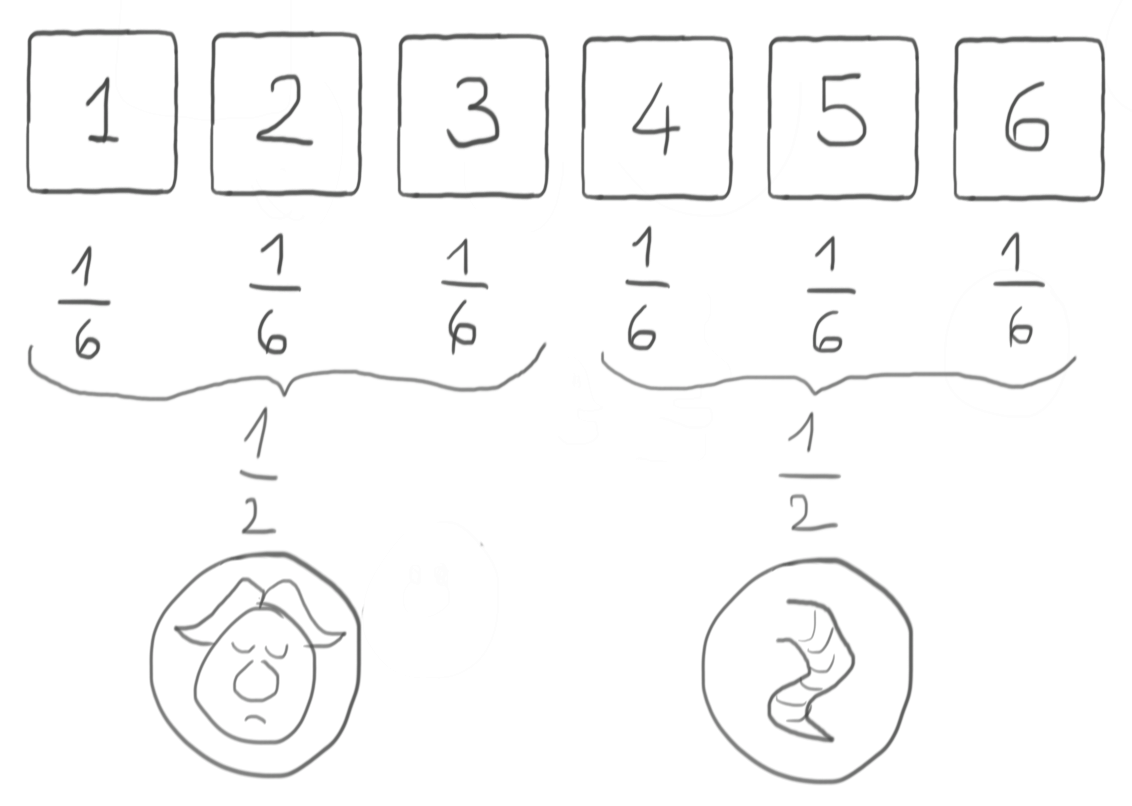 Any three-faces subset of the D6 will do, of course: you might choose e.g. to take odd values for Heads and even values for Tails, or whatever else you like. The important thing is that you decide this before rolling the die!

It’s easy to extend the previous section to also enable generating a 3-sided die from a D6: just group the D6 faces in pairs, and each of them will have probability $\frac{1}{3}$ to come out from a single roll, thus giving us a virtual D3. Again, it’s important to decide beforehand what is the virtual D3 value associated to each pair, e.g. like in the following picture. 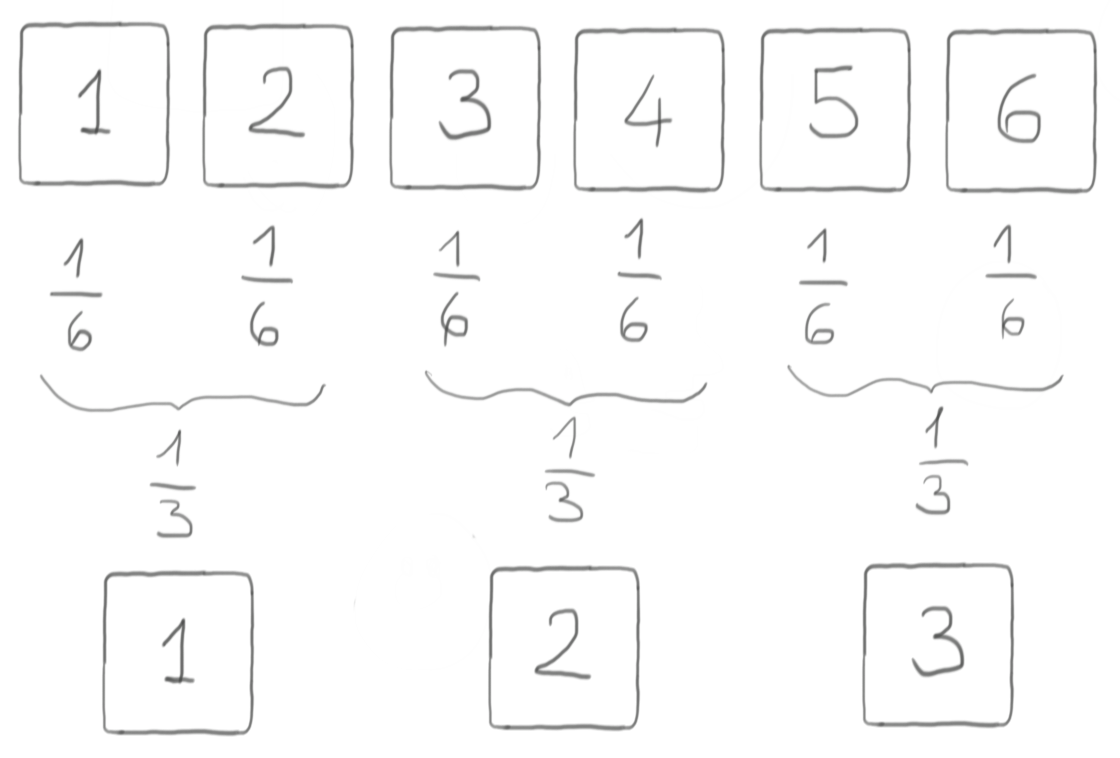 One powerful tool at our disposal is the rejection method. Let’s keep rolling the die until we get a number between 1 and 4 included, rejecting the roll every time it’s a 5 or a 6.

If this gives out anything, it will surely a valid outcome for a D4, because only admissible values 1 to 4 are allowed. Is it fair though?

The conditional probability $P_{1 | {1, 2, 3, 4}}$ is exactly what we are after for establishing the fairness of our virtual D4, because the rejection method ensures us that we got an admissible value (hence, the condition applies). It’s easy to invert the formula, then: 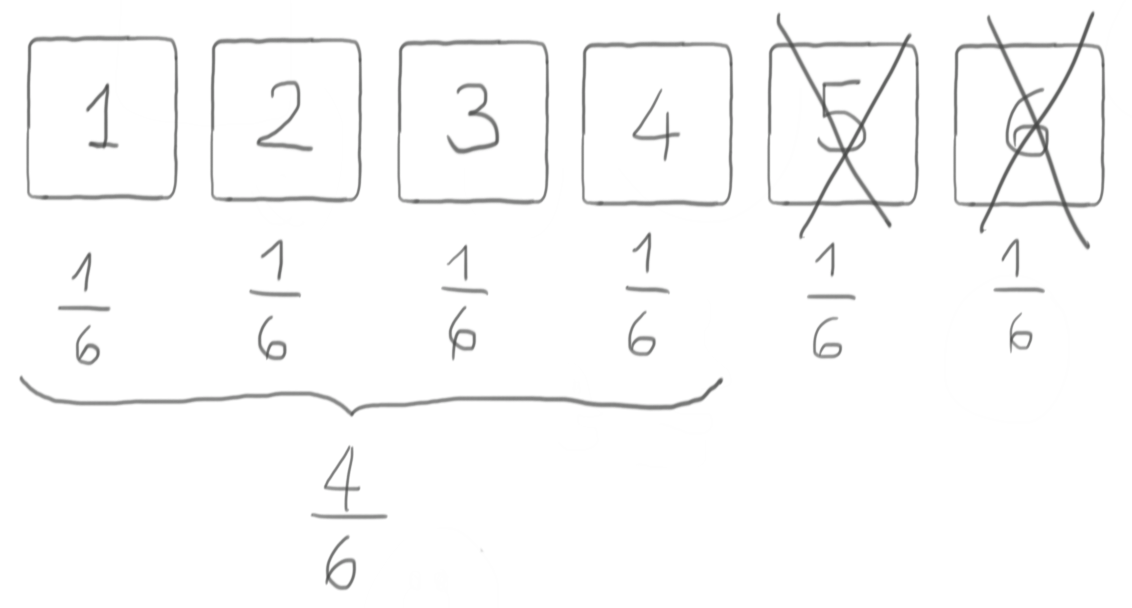 So we end up with this:

The same reasoning can of course be applied to 2, 3, and 4 with equal conclusions, hence our virtual D4 is, indeed, a fair one assuming that the starting D6 is fair. Yay!

As we saw, it’s possible to simulate a virtual D4 from a real D6, although there might be some additional rolling involved when we have to reject a specific roll. This happens with non-trivial probability $\frac{1}{3}$ for a single roll, i.e. on average we will have to re-roll one out of three times and still not be sure it will be enough!

Could we end up trapped in a nightmare of rolling over and over without getting anything meaningful for a long time? Sure we could, but the distribution of this is geometric with an average of $1.5$ rolls needed to get something meaninful out, so there should not be too much to worry.

Or should there be?