Fortune also implemented the algorithm described in the paper as a C program. It does what’s written on the can and more, so it’s not exactly straightforward to follow.

I’ll put some notes below about what I understood of it… I hope they can be useful. The code can be found in Fortune’s homepage (here a link to the copy at the Internet Archive).

Adherence To The Paper

The program is largely adherent to the paper, with some caveats:

The data structures used in the implementation can be divided into two main categories:

Some additional structures/types are also introduced to enhance memory management, but they will not be discussed here.

The definition of type Point is as simple as it can get, just a place to keep track of x and y coordinates:

A Site is slightly more than a Point:

One aspect is that sitenbr provides an identity to the specific Point coord, like a label or a tag. The refcnt helps with memory management and optimization, so it can be ignored from the sweeping line algorithm’s point of view.

The Site type is used to represent both sites and vertices. While this choice might be considered cheap when coming from higher abstraction level languages, this is C and using the same type for entities that share a common fate (the extraction from the Priority Queue can yield either a site or a vertex) is a solid design decision. If anything, I would have probably called it something like Place to avoid a possible misunderstanding.

An Edge represents a bisector line in the plane, with some strings attached. With reference to the article, it represents a boundary between two sites, i.e. $B_{pq}$ (if sites are p and q).

Floats a, b and c are coefficients for the line, according to the following equation:

When a new Edge is created by function bisect in geometry.c, the parameters are normalized so that either a or b is forced to 1. In particular, more vertical lines have a set to 1, while more horizontal lines have b set to 1, which is consistent with fully vertical or horizontal where b and a would be 0, respectively. This also means that a and b are, in absolute value, always less than or equal to 1.

When a new Edge is created in bisect@geometry.c, the lower or leftier site is always put first and the higher or righter site second. This means that the first slot contains the pointer to the site that is either at lower y coordinate or, if the two sites have the same y coordinate, at lower x coordinate. The definition of the following macros:

also assigns a semantic to these slots: the bottom site is considered to be on the left, the other one on the right. This gives the Edge a natural orientation that always goes from right to left, as shown in the following picture.

Every Edge created by bisect@geometry.c has two sites in reg. On the other hand, you might hit a null Edge that is actually a NULL pointer, representing a line at infinity.

The two-slots array of pointers to Site named ep, on the other hand, holds optional pointers to vertices. The optionality is given both by intrinsic reasons (e.g. collinear sites give raise to parallel edges with no vertices, and all edges at the boundary only have one vertex as endpoint but go to infinity otherwise) or algorithm phase reasons (e.g. a vertex has not been introduced yet).

Last, edgenbr provides a unique identity to the Edge, so that if the same line arises again the two resulting edges can be distinguished.

In the original article, each edge $B_{pq}$ (assuming p is “greater than” q as per previous section) is divided into two pieces, namely $C^-_{pq}$ (that lies left of p) and $C^+_{pq}$ (that lies right of p). The Halfedge represents one such part.

This structure mixes in the same place aspects that belong to different operations and semantics.

Other members have to do with the fact that Halfedge triples down as the central structure for representing the Edges List and the Priority Queue too. In particular:

Last, member ELrefcnt is there for memory allocation optimization and will be ignored in the rest of this post.

The Priority Queue described in the article’s algorithm implements an efficient mechanism to determine the next notable point hit by the sweepline, i.e. either a site (leading to a site event) or a vertex (leading to a vertex event).

Theoretically, these would be homogeneous elements put in the same Priority Queue $Q$ data structure. From an implementation point of view, though, the $Q$ is implemented in a half-implicit way as follows:

The list described in the algorithm is supposed to contain a sequence of *-transformed regions and boundaries, where boundaries are ordered by x coordinate and regions can appear multiple times.

In the implementation, the Edge List only contains Halfedges, i.e. parts of the boundaries, and the associated regions can be deduced by looking at the boundaries (at the end of the day, a $C^-_{pq}$ Halfedge has p on the left side and q on the right side).

There is more to this though. Using a simple doubly-linked list would defy the algorithm’s claim of $n \cdot log(n)$ complexity, because iterating through it would take $n$ time instead of $log(n)$. Ideally, this should be implemented with a data structure that allows binary searching over the list of Halfedges (which would be possible thanks to the fact that they can be sorted on the x axis).

For this reason, an hash-based mechanism is added on top of the doubly-linked list, to provide more efficient “entry points” in the list and speed up the search. After finding the most probable spot as a starting point, the list is searched towards the left or towards the right (depending on the relative positions) until the right Halfedge is found. This hash-based mechanism is implemented in edgelist.c, which also contains the logic for searching the closer boundary on the left of a Point (ELleftbnd@edgelist.c).

As already indicated in the first post of the quest, a key part of Fortune’s original algorithm is finding the most interested region by the introduction of a new site.

The algorithm’s description suggests to consider the different sections of hyperbola and how they intersect to find this out, although this is arguably a bit vague. Or, maybe, it’s explained well in the mathematical section but I wasn’t too sharp in understanding it immediately.

At the high level, when a new site is found by the sweep line, the list of all Halfedges found so far is iterated to find the closest one that immediately on the left of this new site. This is done by function ELleftbnd in file edgelist.c. It should ideally be a binary search, as a matter of fact it’s a kind-of linear search optimized with a good guess on the best entry point in the list, via a hash-like mechanism.

Based on the new site’s position, the function takes a first guess at where the most realistic candidate might be in the linked list (this is done using a sort of “hash-cache” pointing to different positions in the doubly-linked list of Halfedges), then moves left or right depending on whether the specific Halfedge is on the right of the new site or not.

One source of doubts when reading the algorithm was the claim that the list of $(r_1, c_1, r_2, …, r_k)$ is ordered by the x coordinate while, at the same time, it can contain the same region multiple times. What I wasn’t grasping is that the ordering is only referred to the boundary halves, not the regions. This is of course immediate to understand looking at the following picture, representing the transformed space. 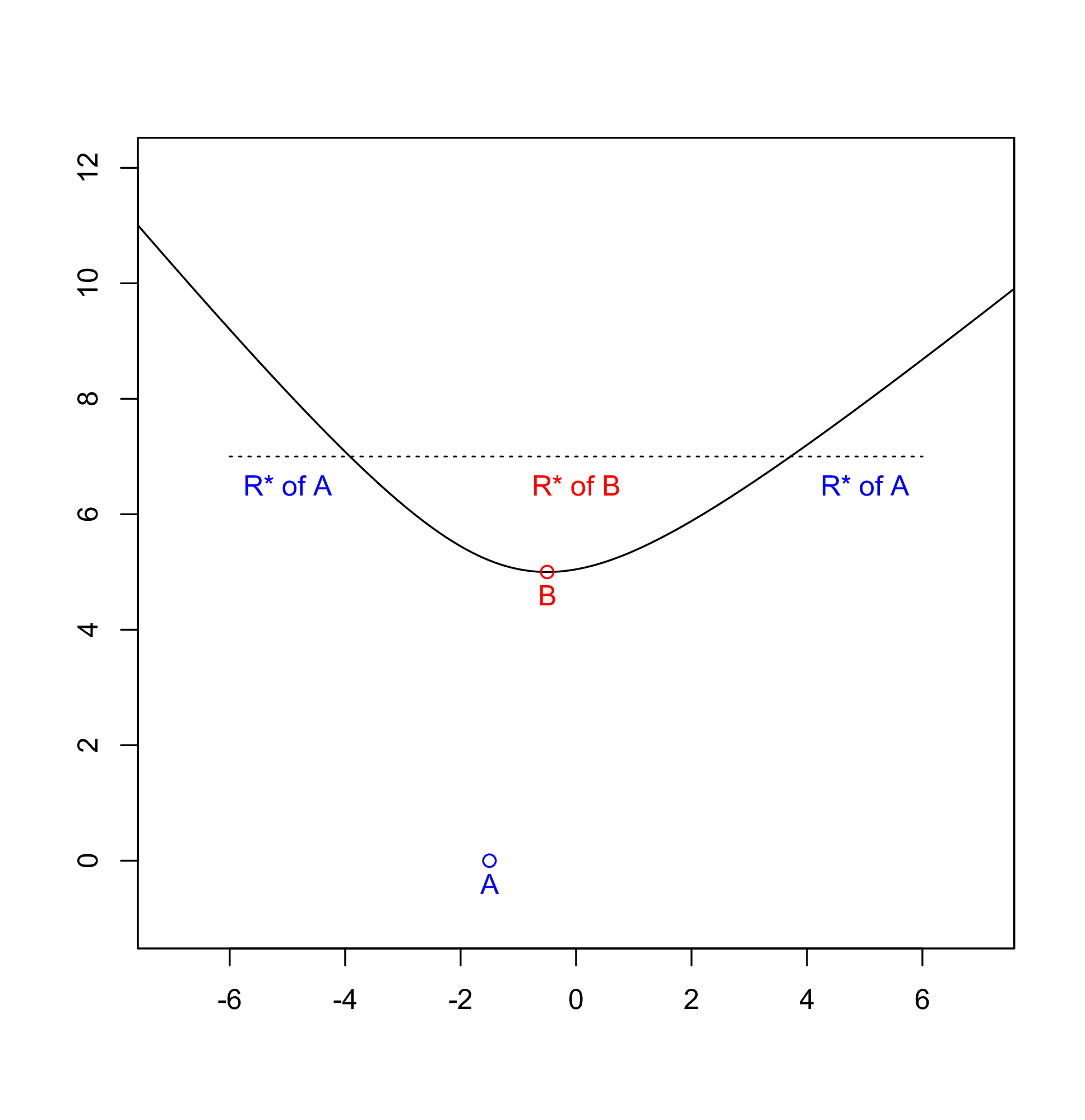 By keeping only Halfedges in the list, and iterating it using right_of@geometry.c, the implementation is indeed capable of leveraging the ordering by x, even though not in the binary search approach suggested in the article but using the hashing mechanism to speed up lookups.

How much above is above?

The key to moving or stopping is function right_of implemented in geometry.c. I initially struggled a bit on this, because its naming of a few variables can be misleading (in particular, the above variable was super-confusing for me, but it was all my fault). This leads us to the following section.

It has to be kept in mind that all operations in the algorithm are thought to happen in the *-transformed space, hence they take into account the Voronoi diagram in the transformed space instead of the original diagram. Thanks to the * transformation introduced by Fortune, all but the sites are pushed up in the plane, so when comparing the y coordinate of two points this has to be taken into account.

The code for right_of@geometry.c makes a distinction based on whether the edge line is more vertical (i.e. a == 1.0) or horizontal (i.e. b == 1.0) but, apart from a technical detail regarding totally vertical lines, the two are equivalent. The latter case establishes whether the new site is above a Halfedge like this:

We will get shortly to why above helps us understand whether a site is right_of the Halfedge. My initial confusion is that the code above compares the distance of the new Site from the point on the bisector immediately below against the distance of this latter point from the topsite (it’s easy to spot Pythagora’s theorem in the inequality).

Now consider the following picture as an example. 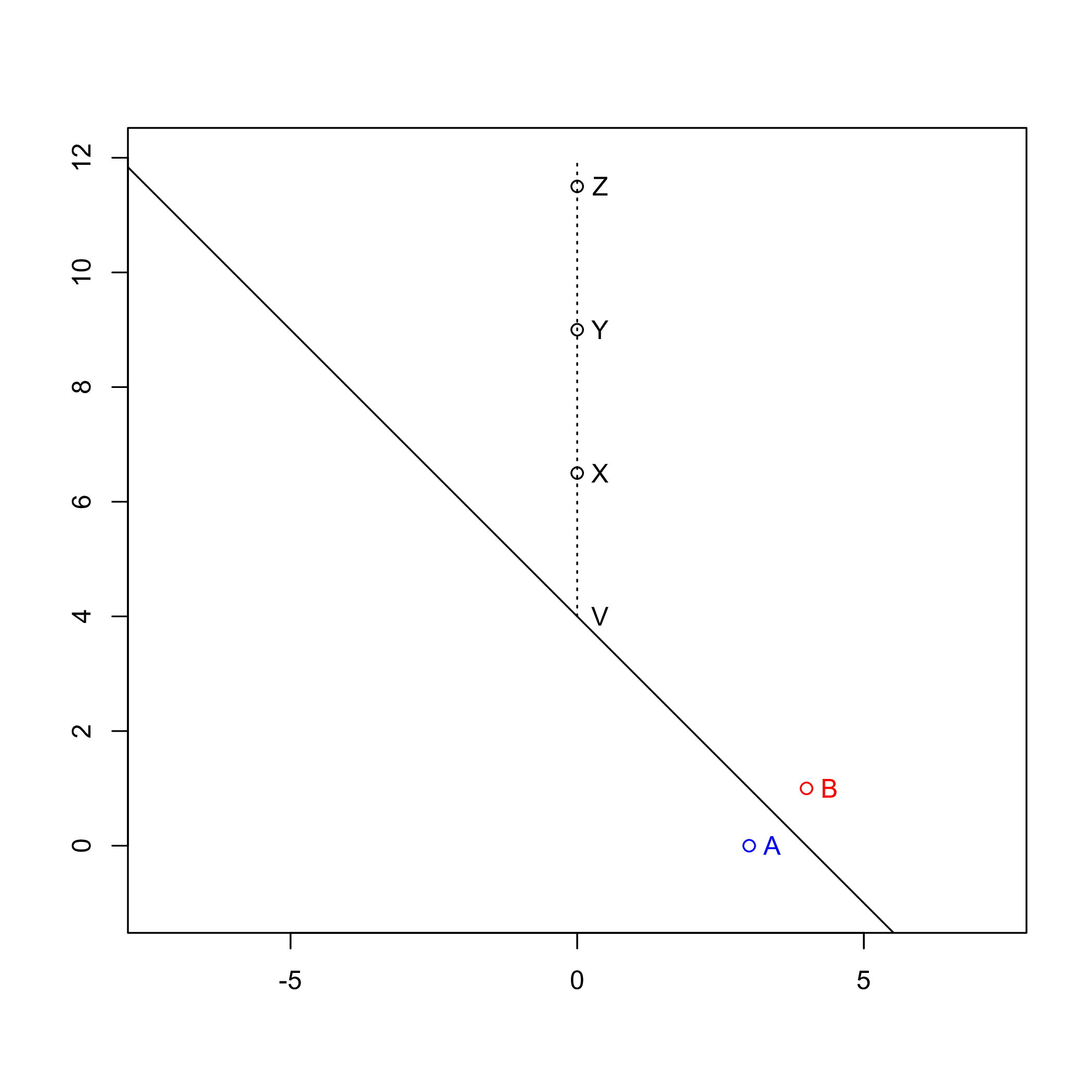 My eyes tell me that site X would be above the Halfedge, and yet the algorithm says it isn’t: point V is mapped onto Y by the * transformation, and X is below it.

This apparent paradox depends on the fact that the picture is not representing what happens in the transformed space, which is what the following picture does. 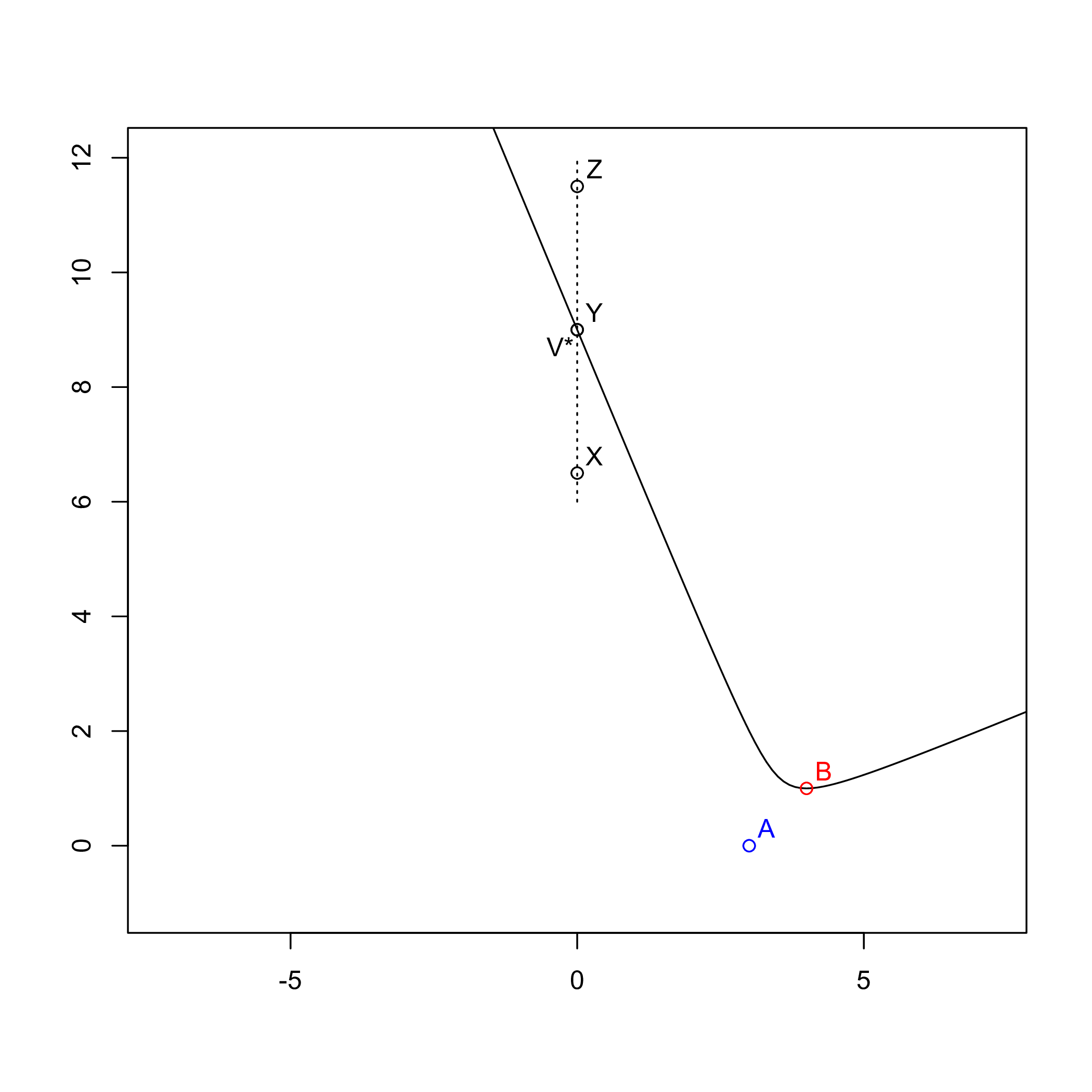 Now it’s indeed clear why X lies below the Halfedge and Z above it. It’s also easy, at this point, to understand why above can help us understand whether the new site is left or right of the Halfedge: below means left (like X) and above means right (like Z), at least for a left Halfedge (the picture shows the left Halfedge because it’s left of its base site, i.e. B). What would happen with a right Halfedge is easily understood from the following picture though. 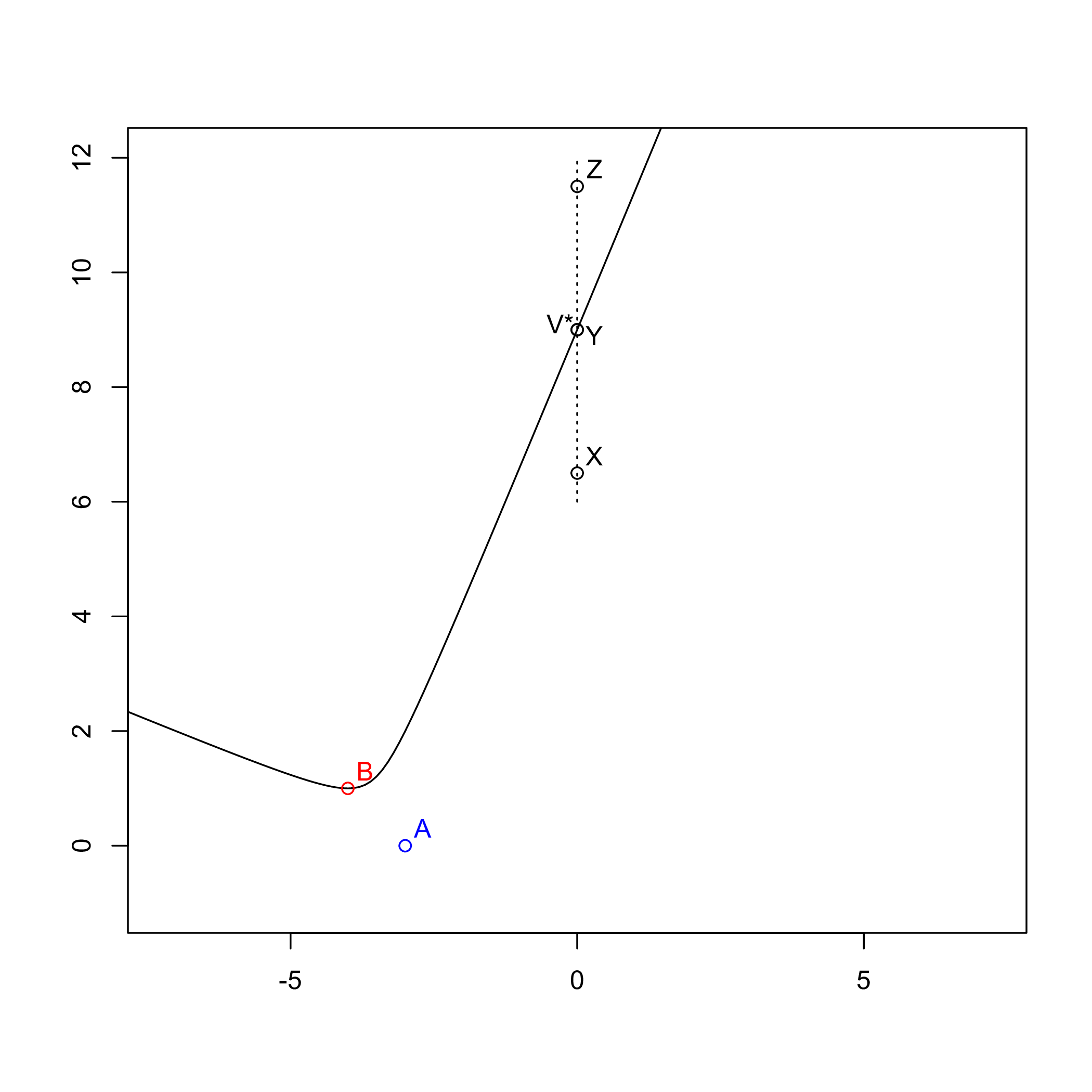 In short, for right Halfedges the relations are inverted: above means left and below means right. This eventually explains the return value from function right_of:

Fortune’s original implementation helps shed a light on the very high-level description of the algorithm provided in the original article from 1987 A sweepline algorithm for Voronoi diagrams, which is also - arguably - the only one that can be called Fortune’s algorithm (at least when linking that paper!).

The implementation is somehow optimized and not really easy to follow, because optimizations (like memory management) are intermixed to enhance performance. Still it’s been very instructive to read it and hopefully understand it as well.